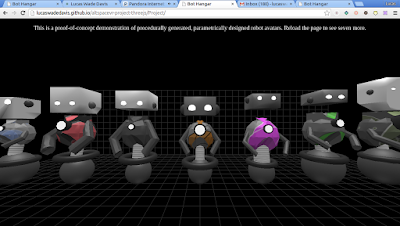 The Bot Hangar is a proof-of-concept demonstration of procedurally generated, parametrically designed robot avatars. Reloading the page will create 7 more.

The two interesting files will be theatre.js and props.js. Theatre is the class for creating the scene, handling camera and lighting, the render loop and any other functionality not specific to things in the scene itself.

Props holds a few publicly available methods (most of which have to do with creating a new Robot - one creates the wireframe floor), and several private utility methods, hidden within the scope of the iife.

The robot is built from the ground up, with each of a series of methods calling the next in the chain for body parts progressively farther from the ground. The methods are long, but they're responsible for procedurally generating the meshes of the robot - including some binary space partitioning magic to handle additions and subtractions to individual meshes along the way. This all progressively constructs a 15 member instance of the THREE.Object3D class (a single robot).


All in all, I'm not terribly ashamed of this as a weekend project.
Posted by Luke Davis at 2:30 AM No comments: