I realized a few weeks ago that lots of the apps in the Ubuntu app store have the default icon (a folder with some refuse sticking out) so I built this thing that would build icons or logos on the fly.

Lots of developers, especially open source developers, want to build something useful but when it comes to making those apps attractive or intuitive the skills our developers use to push great code aren't necessarily applicable.

Iconic won't solve all that, but it can chip away at the block of ugly floating around out there, by subverting the scarce creativity we rely on now with abundant (machine produced) content - and asking the user not to create, but to curate.

Bit by bit, projects like this will make the world more beautiful, and easy to navigate, by amplifying our ability to navigate the vast terrain of all possible X. 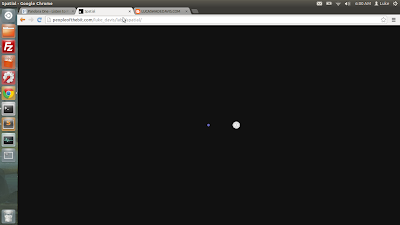 Most visualizations of the Earth-Moon system get either the scale of distance or size way off. It turns out the two are really really far apart, and the moon is WAY smaller than her parent body.

I built this representation with THREE.js and the HTML5 canvas tag so it will work even without WebGL enabled (as long as you're using a reasonably modern browser.

Each orbital period represents about 27.321 days (which is different from the 29.5ish day synodic period - which is what'd you'd observe from a position on earth).
Posted by Luke Davis at 6:12 AM No comments: